East Asia is rich in its unique traditions of music and singing. Deeply entwined in the culture, history, and traditions of each nation; the music of these societies evoke not only how each culture expresses music but how the music expresses each culture. From the Chinese idea of music imparting harmony in society to the Mongolian sense of identity through their guttural melodies and to the chants of Japanese Buddhism, East Asian express identity through music and helps weave a tapestry of what how each nation derives meaning and order. 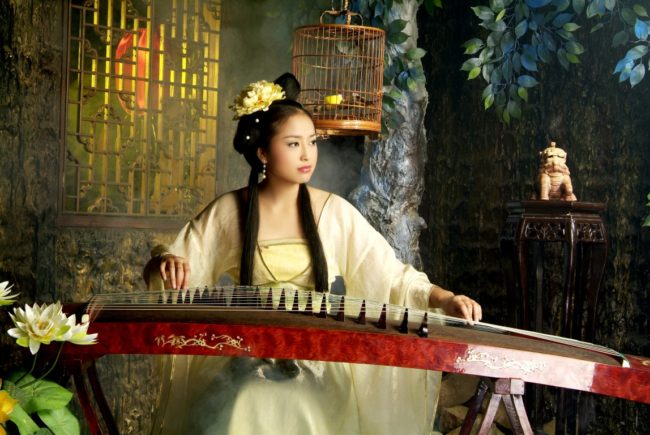 There is a classic story in Chinese literature from around 2697 BCE concerning the origins of the music of China. The Emperor Huangdi sought a means to merge the harmony of the universe with his empire and its subjects. He ordered his scholar name Ling Lun to find a means to make this happen. Lin Lun began a quest that led him to the western mountains of the empire to seek out a particular kind of bamboo tree. Cutting out pipes from these trees, Lin Lun fashioned a musical instrument that could match the bird call of a fenhuang, an immortal fowl who’srare appearance was seen as a sign of harmony during the reign of the emperor.

The myth has been used as a means of not only explaining how music began in China but also expressing its purpose and goal.

From this fable one learns of how Chinese traditional music is deeply root into its society and customs. It has been used as means of creating harmony among the populous and contentment throughout all echelons of its society.

The famous Chinese philosopher, who lived roughly 2,500 years ago, has been one the main sources for how Chinese traditional music has been understood, especially the concept of music as promoting harmony. One of his sayings expresses that “To educate somebody, you should start with poems, emphasize ceremonies, and finish with music.”

Confucius supposedly believed that of the six most important subjects to study, music was the second more vital discipline beneath the study of ritual and public ceremony—followed by archery, chariot-riding, calligraphy/writing, and computation or mathematics.

Several styles of music over the centuries have developed in China. Each can be identified through the variety of performers and the complexity of the performance.

Traditional Music Ensembles and large orchestras are popular in Chinese music where musicians focus on simple harmonies. Music general de-emphasizes rhythm and beats in favor of tranquility melodies the typify the Confucius ideas on music.

Solo Instrumental Performance have long been important of Chinese art and music, focusing on the abstract art of music in terms of tonal harmony. The discipline of music was seen as a vital skill and was expected that scholars not only be able to perform music but to do so with confident proficiency. 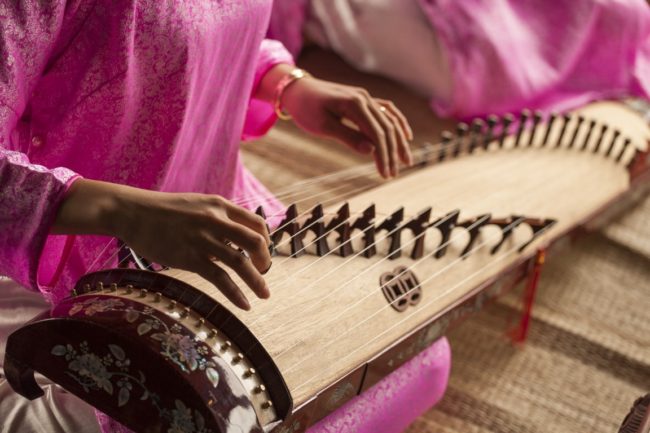 The people Korean people have a long tradition of shamanism with rituals and ceremonies focused on the communication, through shaman trance, with the unseen world of spirits and other creatures. In this context, ancient Korean music has focused on agricultural festivals and dancing.

The Tools of Music

Many instruments used in Korea are derived from China but there are many others that are born from the Peninsula. Among these instruments, along with instruments from outside the nation, the Korean sound is built.

Taegum flutes have six fingers holes along with a membrane-covered hole to create a buzzing tone. The most remarkable element of these instruments is its size, ranging in length to around 31 inches with a huge mouth-hole.

Komungo zithers have six strings, which are adapted from the Chinese string zither called the Qin. Twon strings on one side of the instrument along with one on the other side include movable bridges. The central three strings passes over 16 bridges. The strings are played using a wooden stick, which plucked them.

Haegŭm fiddles have only two strings and use a box that passes between the stings. The neck is bent toward the strings while pegs are inserted backwards, allowing the strings to be wrapped around the large round portion of the pegs.

The Voices of the Royal Court

Court music has a long tradition in the Korean culture as singing is revered as the music of royalty. There are three traditions of vocal music—Kagok, Sijo, and Kasa—which have entertained and orchestrated court life in Korea.

Kagok, which is the rarest of all the older forms of vocal music, is built around one duet and 26 solo songs; each song comprising five movements. A small ensemble of musicians provides accompaniment and interlude with the singing.

Sijo, originally a three-line Korean lyric poem, is also sung with the accompaniment of hourglass drum. A double-reed aerophone, a flute, or a fiddle joins the singer and drummer in moral formal settings.

Kasa is a narrative song that is usually accompanied by a flute and drum.

This form of narrative song is deeply rooted in Korea’s folk tradition. It is traditionally performed by a singer narrator known as a kwangdae along with an accompanying drummer known as a kosu. The kosu drummer marks phrases with a rhythmic pattern using a bareel drum, which is called a puk and uttering vocal interjections.

It is said the P’ansori came out of Korea’s ancient shamanistic traditions to entertain the gods. It eventually became popular with the aristocracy. 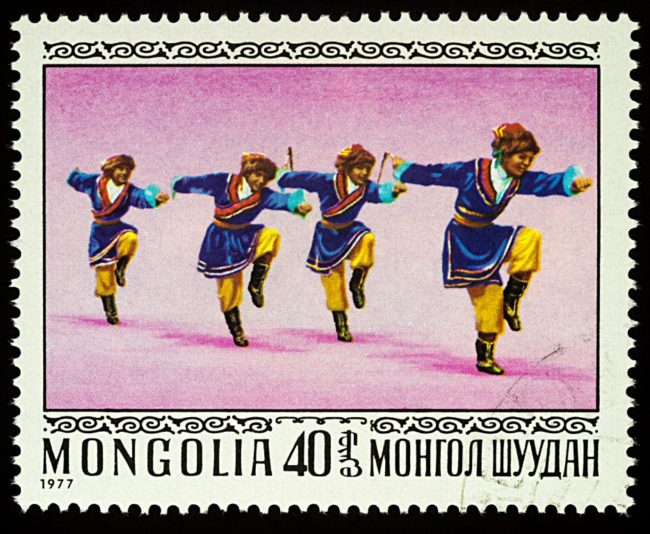 The people of Mongolia are in love with the landscape of their steppe homeland, their famous horses, and the open steppe culture that has survived the Millennia. Their music has embraced a unique tradition of singing and exotic instruments that iconify everything Mongolian

Once upon time a poor man had a great horse, faster than a bird. One day he found his horse dead. Heartbroken, he commenced to carve a fiddle from its remains. Mournfully fixing the horse’s head to the handle; he laid down his head next to his horses remains to join his spirit with his dead steed’s. He began playing, eulogizing the eminence of his departed friend.

This is the legendary myth of the beginnings of the Morin khuur, the Horse Head Fiddle. It is become the national instrument of Mongolia. Known to embody the sounds and motions of a horse, this square fiddle has a lengthy, level handle that is curled at its tip, which is crowned with a carving of a horse. It is the goal of every Mongolian family to own a morin khuur, though expensive. The fiddle has a unique sound that is the signature voice of many Mongolian melodies and the model of all musical instruments in the nation.

Long Song is oldest vocal tradition in Mongolia. Singers vocalize as long as possible, modulating vowels, to enchant listeners and moan the verses. These frequently maudlin songs express the solitude of nomadistic living and the enormity of the steppe landscape.

Short Song is a more recent vocal style, often filled with wit and humor. These songs express topics of love, women, Mongolia, and horses. These songs are less involved than the challenging epics of long songs, but are more common and entrenched in the daily life of Mongolians.

Odes, known as Magtaal, are epic hymns that offer poetic praise while rooted in the shamanistic tradition. The subject of these songs range from horses to scared mountains. These songs play an important part of Mongol nomadic life and culture. 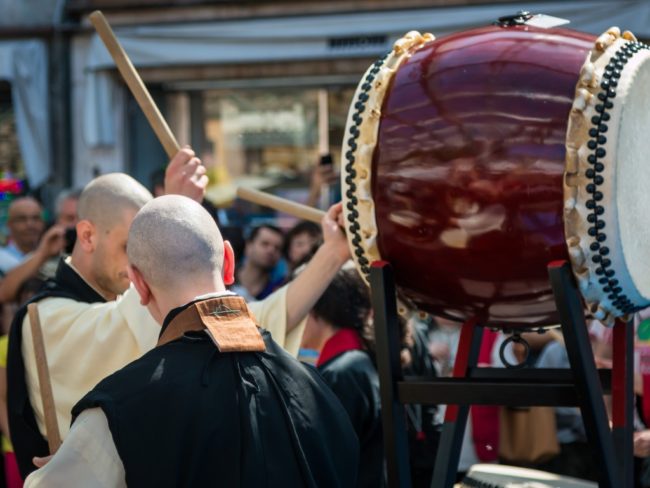 Poetry and song, from the earliest epochs Japanese culture, have been a vital part of its culture, but sometimes the distinction between either has been blurred. The Japanese use the same word for song and poem—“uta.” Regardless, poetry is always supposed to be recited out loud in ancient Japan and can be understood as a hallmark of how music is experienced.

Japan and China influenced one another throughout their birth and maturation. During the early eras of Japan, the nation adopted the musical tradition of Gigaku. Japanese styles preserved as a part of Gagaku including Kagura, Azuma Asobi, Fuzoku and Saibara. Kagura, which comes in many styles in Japan, was revered and preserved in the Imperial Court. Azuma Asobi are folk songs from the eastern lands of ancient Japan. Fuzoku are other ancient folk songs originating in the provinces. Saibara is a unique genre, which is considered to originate in folk traditions as well.

Gagaku music is performed with wind and string instruments along with percussions. Many performances include dance.

This tradition is a form of Buddhist chanting that entered Japan 710 BCE. During this era, there was a strong tradition of chanting and elaborate rituals. This genre of chants required highly practiced professionals who performed in Buddhist monasteries in imperial courts alike.

There are three styles of Shomyo: Bonsan, Kansan, and Wasan.

This form of music began to appear around 1100 BCE. “Imayo” in Japanese means modern. These songs were Gagaku melodies in which lyrics were added to create this new genre. In other cases, these songs were built on hymns from Buddhist missionaries. The tradition is now considered archaic, but celebrations of the tradition can be found in classic Japanese literature.