Southeast Asia is an exotic and mysterious region, known both for its lush jungles and unique cultures. Influenced its surrounding nations, many of the countries of Southeast Asia have absorbed influences from both China and India while expressing their own unique expression of music. From ensemble of gongs musicians to chamber orchestras, Southeast Asian music is both an immersive and celebratory experience. Here is just a sample some of these countries and their musical traditions.

This nation of islands has always been a typhoon of different cultural traditions. From Polynesian to Asian to European, the country has blended the colors of the societies to create the mélange of traditions that encompasses the nation. This is true also of their music. To express music, the Philippines harnesses an immense canvas of instrumentation: drums, flutes, lutes, gongs, zithers, clappers, and buzzers. To perform the music, the Philippines incorporates a palate of genres: epics focused on ancestry and the adventures of gods and heroes; work songs on planting, harvesting, fishing; ritual songs to drive away evil or invoke blessings; festival songs to celebrate marriage, birth, and victories; mourning songs; serenades; and game songs for children.

At the heart of Filipino music is the ancient and iconic sound of gong music based on an instrument known as the Kulintang. The instrument harnesses a collage of gongs that are assembled into a series of knobbed metal plates from an assortment alloys—bronze, brass, or steel. The instruments are organized in a set of eight small gongs in advancing sizes laid flat on a rack. The player uses soft sticks, which are made of Maguindanaon tropical wood, to subtly perform the melodic notes of a Kulintang composition.

The rhythms of Kulintang incorporates both a beat and melody. Entrancing and electrifying, the assortment of gongs both evokes a sense of pensive relaxation and festive energy.

This style of Filipino music became a popular genre during the period of rule under the Spanish, around the turn of the 21st century. The genre draws from the classical guitar traditions of Spain and re-envisions it as a Filipino expression of adoration and melody. The style is based on the Mexican/Spanish lyrical courtship melodies and Spanish/Cuban habanera rhythms immersed in the passion of Tagalog romantic ballads and instrumentals.

The music is performed in a manner that plays like a soundtrack to a love affair, from the innocent beginnings of love to the frustration of romance, evoking both the texture of Spain and the flavor of the Philippines. 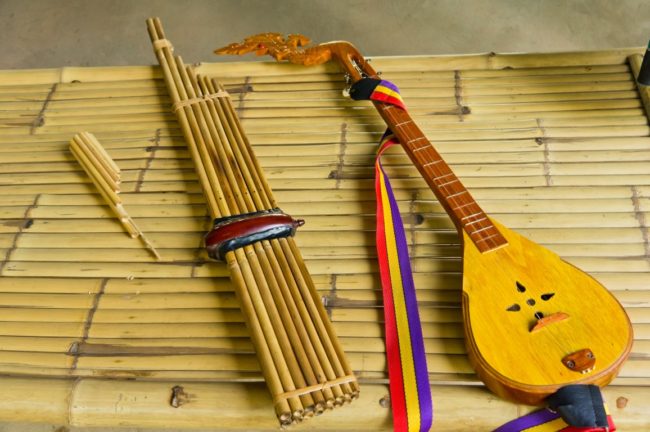 The music of Thailand is both exotic and familiar to many listeners. Listening to the music, one can hear echoes of China and India throughout the clamor of instruments and singers. Influenced by both nations, the sound of Thailand bespeaks of its unique location in Asia as it embraces the traditions of its neighbors before opening its arms to reveal its distinctive Thai sound.

It is said that Thai music was cultivated from India because of the nation’s influence throughout the Asian country in early history; however, the music ultimately was shaped into a very characteristic, signature Thai sound. The earliest record of Thai music was discovered in the Sukhothai period between 1238 and 1438, during the same period when King Ram Khamhaeng is credited for both inventing the Thai alphabet and establishing Theravada Buddhism as the state religion.

The music of Luk Thung translates to “Child of the field song.” This genre of music generally is considered Thai country music. The music originated in rural central Thailand and is generally associated with a common instrument called the khaen, which is a traditional wood and bamboo mouthed organ similar to a harmonic.

The music of Luk Thung is both festive and very traditional. Songs are often poetic reflections of life in the rural regions of Thailand, along with celebrations of Thai culture and society. Topics for Luk Thung include the plights of the rural poor, the beauty of the natural Thai landscape, love, religion, politics, and culture. Songs are generally sung with a Thai country accent while performed with imported western instruments and traditional Thai instruments— including the legendary khaen.

The khaen is one the most prominent instruments in Thailand and surrounding nations, from Laos and onward. The instrument is considered a mouth organ, meaning that sounds are created by the blowing of air through vibrating reeds in the frame of the instrument. The khaen originally comes from Lao and is typically made of bamboo. The most interesting element of the khaen, unlike other mouth organs, is it lack of reeds. Instead, the melodies are fully or partially dependent on the shape of the instrument body. The khaen can commonly is heard during Thai music and especially in Luk Thung songs.

The nation of Malay is another country seeping with the traditions of the various cultures that interacted with and colonized it. Malay has hosted settlers over the centuries from Portugal, India, and China. And so, each culture’s tradition of dance and music has enriched Malaysia, creating a culture of music that is both iconic of the Malaysian culture and a reflection of the sounds of Malaysia’s visitors. 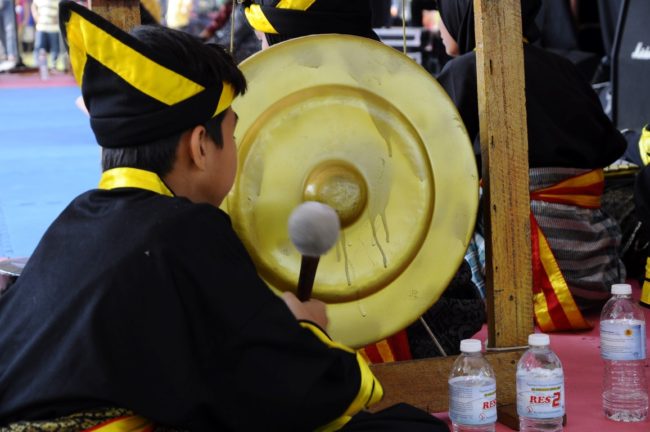 From these layers, the foundational music traditions of the nation have envelope the settler’s traditions through the use of an assortment of Malaysian instruments, whose uses have evolved with time. In the days of the ancient kingdoms of Malay, the traditional rhythms and beats of the giant rebana ubi drum were utilized to alert and warn, but later these traditions became the frame of Malaysian music and dance. Meanwhile, the Kompang, the remarkable tambourine like hand drum, was used in national parades and weddings but now has become the most commonly played instrument in Malaysia ensembles.

These indigenous orchestras express Malaysian music through a large collection of gongs and percussive metal instruments. Gongs are suspended vertically or laid horizontally while played. The percussive instruments include bonang, xylophone, and various metallophones—an instrument that uses a series of metal plates that carry sound through a resonance trough or tubes. Sustained melodies are played by the bamboo flute or a rebab, which is a bowed-stringed instrument.

Predating the both Hindu and Buddhist cultures, the gamelan orchestra has a long tradition. Beginning in Majapahit Empire of Indonesia, Malay gamelan was generally performed at royal occasions and is alive today as an important part of Malaysian culture.

The music of Vietnam thrives on a variety of sounds that swim in a vast ocean of provincial genres. There are three forms of opera: hat cheo (traditional court opera), hat tuong (classical drama), and hat cai luong (modern theater). There are several forms of folk music including quan ho, which are folk songs sung by women and between women; and dan ca, which are folk music that have unique expressions depending on the region of Vietnam. There is the cat tru, which are declamation songs. There is the hat doi, which are love ballads performed as duets between men and women. There are so many kinds of music that there is no way to list them all here. 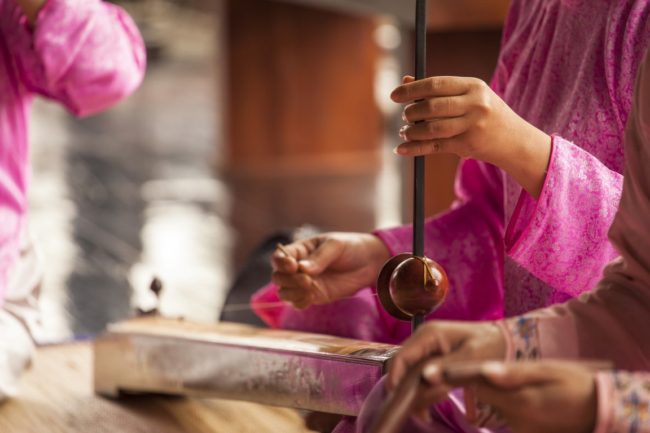 So much of what we know about Vietnam in the U.S. is tainted by the war we fought there decades ago, and yet Vietnam still has much to offer us. Located amongst a collection of Southeast Asian countries, Vietnam, with its sixty ethnic minorities and legendary jungles, is seeping in its music traditions as diverse as is culture.

Being the last vestige of the Vietnamese Court Music, hue contains all the elements of the elder form that burgeoned over 1,000 years before. Hue contains the iconic elements that color the various ethnic groups within the nation including the Viet, Cham, and Chinese. The ambience of the music expresses the characteristics of the communities around the central region of the nation.

This genre has a long standing tradition in Vietnam culture along with providing a soundtrack to Vietnamese festivals, customs, and rituals. The songs speak in a scholarly manner using words concisely with ample doses of metaphor and imagery. Songs are performed by three singers—a woman who sings while playing an instrument called the phach, a man who plays a three string lute called the Đàn đáy, and a woman or man who beats a drum called the trong chau.

This form of folk singing is considered an art form of a highly collective manner. Quan ho finds its origins in in Bac Ninh Province. During village festivals, the young people of the community join together to sing quan ho. Singing shifts between different groups of singers, alternating between two women from one village, and two men from another village who respond. Both sing to one another and reciting a conversation that encompasses the content of the song. Anyone is welcome to participate in a Quan ho as the singing drifts from women to men.

These are only a sample of the countries in Southeast Asia. There are many other nations to explore. We welcome you to continue your journey into the mysteries of Southeast Asian music. Here is a small list:

The Diversity of Philippine Music Cultures

The History Of Malay Gamelan

The Music of Vietnam

Music of Vietnam, Past and Present