We constantly get questions like: “Why should I upgrade an OEM system in my car instead of simply putting my phone on a dash via the phone holder?”

Let’s analyze the pros and cons of the former vs latter based in our experience working with automotive interfaces and some commonsense statistics.

With smartphones taking over our life, it’s no wonder they’re penetrating vehicle usage as well.

The benefits are clear:

While all these are very attractive benefits, what are the disadvantages?

Legality of handling the phone while driving. 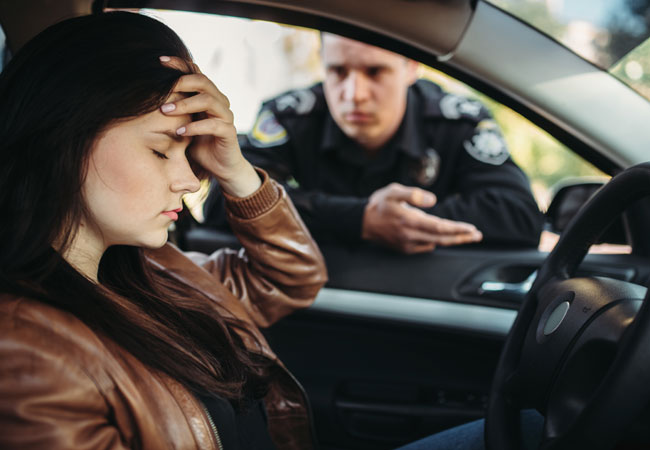 In most countries, handling the smartphone while driving is illegal. Setting up directions or changing song selections via phone interactions must be performed while stationary, which limits the usefulness of the phone. Add to the mix the fact that smartphones have many other apps running in the background which can interact with the screen while driving which diverts driver’s attention unintentionally.

According to the latest studies, the usage of smartphones is the main reason for accidents in US (around 25% of all accidents). 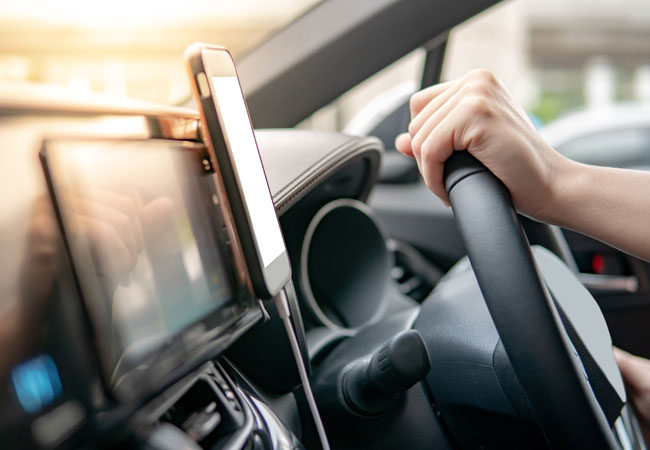 Most automotive screens are 7-8” in diagonal measurement, the phones are usually around 5.2” these days. A 2” difference may not seem too drastic, but it yields almost twice as much viewable area (~75%) of the display.

We are talking about a factory screen being twice as large as an average smartphone and it sits at almost the same distance (2-3 ft) from the driver’s eyes. This allows for visual information to fit into the OEM screen in a more visible and easily understood fashion. The difference is more drastic if we consider the newest trend in fitting 10” or even 12” displays into the vehicle.

Even though it may sit slightly farther (3-4 ft on average), you still get plenty of visual space to display the information in theright way with little distraction. Let’s not forget the position of the OEM display, that is usually located close to the line of sight, which results in much less time to refocus attention from the road and back. 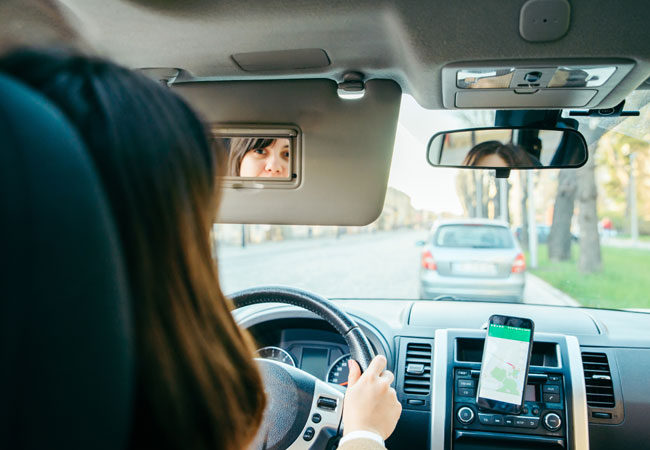 Screen of a phone while used in the car for navigation

Automotive displays by design should feature high values for brightness giving the nature of the automobile environment it is used in.

The best, top-priced smartphones on the market (iPhone, Samsung) feature ~800 nits, which is impressive by any standard, but these are very expensive phones and only represent 20% of the total sales.

In most cases, customers deal with ~500 nits for an average phone. Add into picture the fact that most phones feature the high gloss screens and are mounted in a clear view (air vents or dash mount) of the light. They are prone to picking up the ambient lighting easily, making it hard reading the data from the smartphone screen in the quickly changing light conditions that are very common in the car. 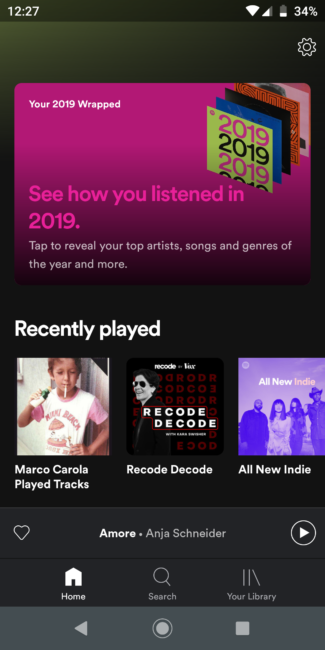 Spotify Screen unoptimized for in-vehicle use

While some apps have features for car mode, night and day color palette, most apps do not have those features and require full attention to the screen to operate.

Since there is no generic way to limit the usage of certain apps while driving, people tend to underestimate the consequences of diverting attention from the road to manage the app they use on the phone.

Many modern design practices (material design for example) feature low contrast, small fonts, flat icons and swipe activated actions. Such characteristics require a much longer attention span to operate the UI, which makes it extremely dangerous and distracting while driving. 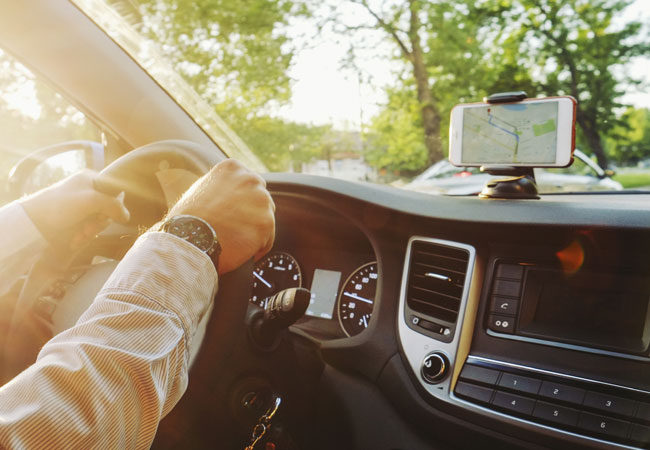 Modern cars feature very little space for the phone to be mounted in an accessible and useful location. Finding the spot that does not interfere with air flow, screens, or buttons is difficult, which forces most people to use air vent mounts or dashboard sticky pads. Air vent mounts lead to a distracted air flow either for driver or passenger and also expose the phone to extreme temperature conditions, which leads to a much shorter life span for the phone’s battery or screen.

Dash mounts lead to exposure to the sun and are also prone to overheating due to prolonged screen usage. Most smartphones are designed to be used in a very narrow temperature range. Usually 32-95 degrees F (0-35 degrees C).

Anything beyond that range will lead to more stress on the phone.

Many people think of the phone as a disposable good with a certain life span after which it is fully replaced. Usually, it is 2 years, given the latest improvements in screens, battery technology, and frame materials.

The most wearable parts of the phone are the display (LCD/LED) and battery. Usually, these are the parts that diminish faster over time with increased usage. On average, people spend around 2 hours a day using their smartphones while the screen is on (screen time) (3).

The average driver spends around 1 hour every day in the car (4). Given those numbers and the fact that screen consumes most of the energy from the phone’s battery, we may conclude that by simply using your phone with the screen on while driving will decrease its life expectancy by 50%. The average cost of a phone in US is ~$500 (5). So, the decrease in the life span of the phone by 50% adds $125/year “car usage tax” to your budget, on average. If your phone’s cost is $1000, then it will be an extra $250/year!

Risks of forgetting the phone in the car.

While it is not common scenario for people to forget their phone in the car, it is worthwhile to consider the risk. There are few scenarios that can happen when phone is forgotten in the car, especially if it is mounted in clear sight and the car is parked in a public spot.

Again, those scenarios are not common, but the price you pay in either occurrence is exceeding the cost of the phone. 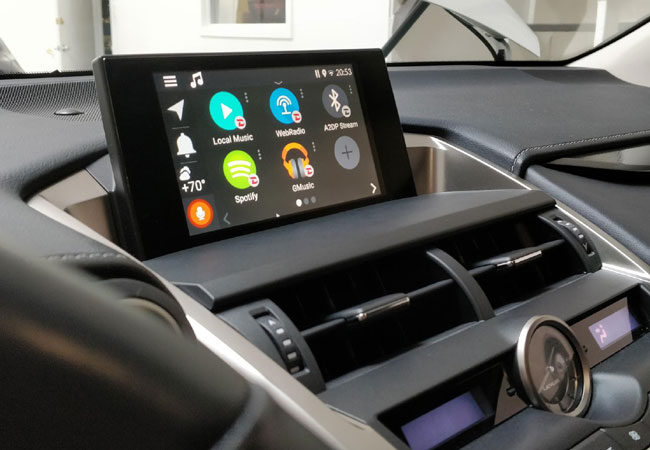 With the latest aftermarket developments to retrofit dated OEM systems with modern navigation, media and apps support, and its price range within $350-$600, it is a very compelling solution to consider.

Some other considerations if you already have smartphone integration in your vehicle:

– Keep your phone hidden all the time so that apps or screen activity do not disturb you while driving. Also minimizes the risk of the phone overheating or being stolen.

– Use phone integration that does not require your phone screen to be active while driving, reducing usage strain on screen and battery. (Phone screen mirroring is a bad choice!)

– Phone integration should allow for a simple and effective way to use your voice for setting directions or music selection, steering wheel, or dedicated stereo buttons.

– Two-way interaction. There should be no need to reach for the phone to change the navigation or music selection.

Some useful links for best in class technology to use in the car: