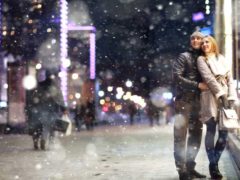 We all know that the time runs fast, and in a couple of weeks we will be rushing through the stores, looking for the gifts for our loved ones. Christmas… Read more »