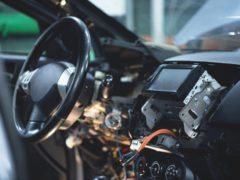 Why do people replace factory radios ? The average age of passenger vehicles in US is climbing. It sits at 11.9 years in 2020 and is poised to grow considering… Read more »

GROM Audio has been an innovator in car audio hardware, developing a series of pioneering car kits that integrate Smartphones to car stereo systems. Their car kit integrates USB and… Read more »

Are you excited about drive mode app DashLinQ, GROM Audio’s latest entry into the Smartphone apps? In the arena of apps focused around driver-safe access to Smartphone features, GROM Audio… Read more »

Here is the great riddle for the modern driver: is there an app I can use while focusing entirely on the road?Apps seem entirely designed to arrest your attention and… Read more »

Here is the great riddle for the modern driver: is there an app I can use while focusing entirely on the road? Apps seem entirely designed to arrest your attention… Read more »

At GROM Audio, we really love music. That is what has driven us to develop car kits to access hand-held devices to your car stereo system more efficiently and safely…. Read more »